Many people have heard the word “Bollywood” and they might have some notion of what it means. Brightly colored costumes and exciting dance numbers might even spring to mind. But for most of us, Bollywood is just a vague concept about which we don’t know much. If you are considering signing up for our Bollywood dance classes, we encourage you to read this brief history of Bollywood before you start! 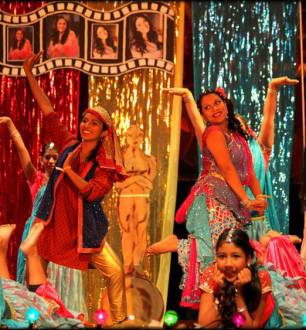 The word Bollywood comes from a mash-up of two words, Bombay (today known as Mumbai) and Hollywood. It’s sort of the catch-all term for movies made in India. Bollywood is the center of a thriving Indian film industry, where hundreds of movies are made each year and ticket sales actually out-perform those of films made in Hollywood. The industry started at the beginning of the 20th Century and by the 1930’s, hundreds of films were being made in India every year. The film industry in India experienced a peak starting in the 1940’s and lasting through the 1960’s, the decades immediately following the gain of the independence from England. Today, it’s an integral part of Indian culture.

Where Does Dance Come In?

Dance is at the heart of these films! Bollywood movies are filled with music and dance, the quality of which can often make or break the movie. Bollywood dancing is beautiful to watch and exciting to perform. We teach dancers in our Bollywood dance classes how to perform many traditional and modern Indian dances. Our classes cater to all ages and experience levels, too!